Designers can now see load paths at design concept stage to reduce the cost of the engineer.

Hi everyone, I thought I should get a bit technical and talk about load paths and weight distribution and why I decided we needed it in PlusSpec, after all, we are not engineers right? 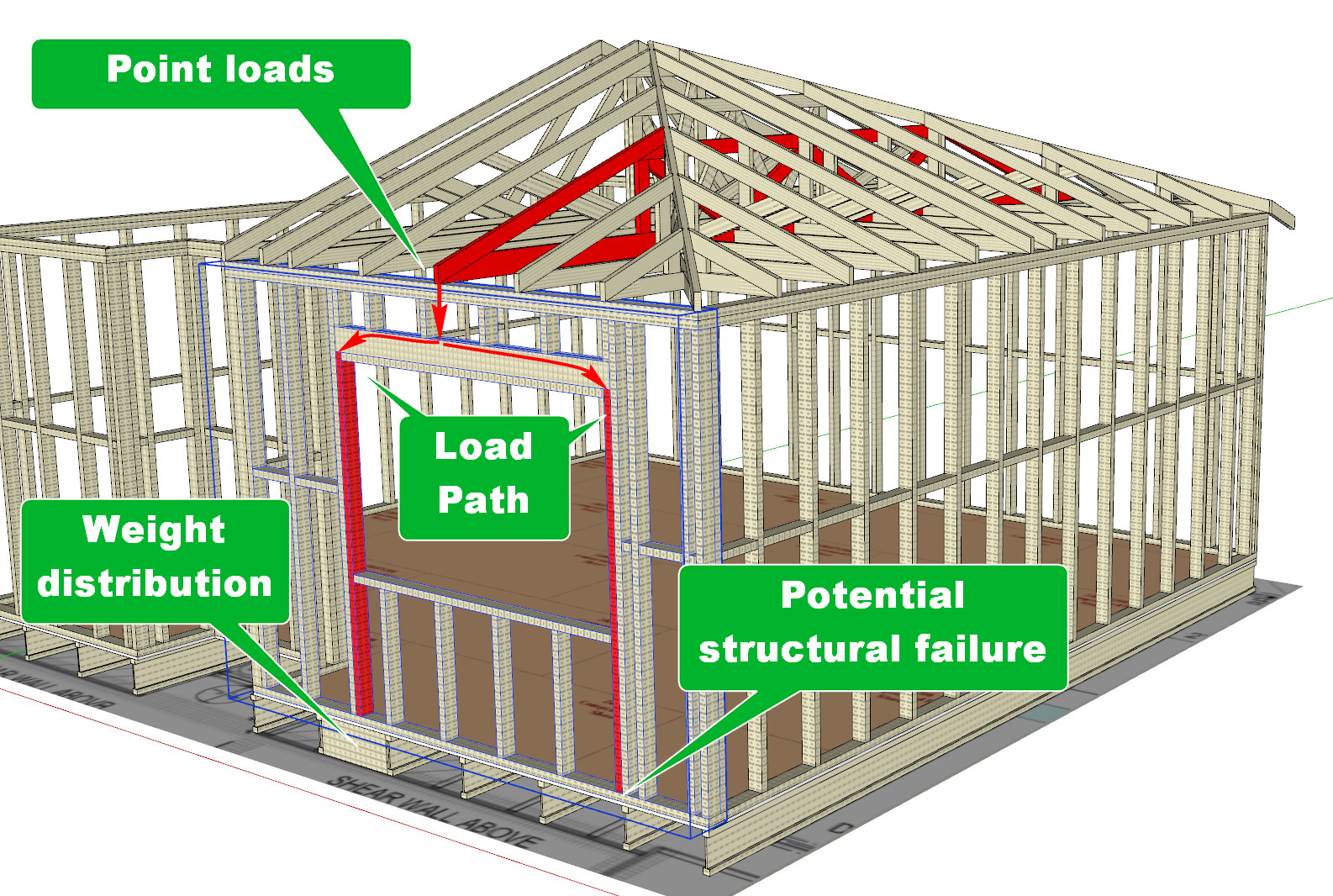 Diagram outlining a typical load path that an engineer may specify

Why? Isn’t this the job of the engineer?

Is it just me or does anyone else design with point loads in mind?  I build and design and found myself designing unneeded cost into projects and I should have known better. I decided to add in typical point loads in PlusSpec 2017 so you guys can benefit from my experiences., By the way,  I/we have not added notifications everywhere yet we did add them in trusses and wall frames.

What the hell is a point load?

If you are not sure what a point load is it is where a concentrated load is placed in a wall or structure, a distinct section that carries more weight &/or uplift. EG a window jack stud or a girder truss. If you do not know what these are, it does not matter as we painted them Red so you can avoid long spans underneath them or so the engineer can specify hold down requirements to prevent uplift.

Are all Red Studs and Girder trusses point loads in PlusSpec?

Not all red studs are point loads, however, it is good to know that there is a potential issue y looking for the red when viewing your 3D model in structural mode.

When should I disregard a point load?

PlusSpec will add a point load next to every window or door, so if you have a specified stud spacing of 600mm or 2Ft and you have a window that is less than that measure, you can most likely disregard the point load. If you have a truss that is red this generally means that the truss is holding more weight than the truss next to it and therefore it will have more weight and uplift,  the longer the truss the higher the loads.

When should I pay attention to a red stud?

If your window or door opening is wider than your stud spacing and you have weight or a tie down above generally, you should take this into consideration. If you are unsure talk with your engineer or a qualified person.  When I get my designs engineered I always use an engineer who will work with Sketchup and preferably PlusSpec. Getting an engineer to add in steel beams or change sizes of the head to suit loads is a big time saver and it helps with reducing problems onsite.

Designing with structure in mind reduces the cost of construction.

There are many situations where you can reduce the cost of a project by 10s or hundred of thousands of dollars, even millions of dollars. A good example is when designing a room that is greater than the span of a joist, the rule of thumb is a 300mm (12 inches) floor joist holding floor load only is 6m (18 Ft). When a designer designs the room with a second storey over which is 6.1m, it is likely that the joist size across the entire project should all be increased or a steel beam added, this could easily equate toy $2000to$50000 depending on the project size.  In the case of a point load, adding two small windows each side of a girder can save thousands of dollars on one window alone.

It’s Friday afternoon 508 PM, I have heaps more to write about but I am thirsty.  Keep your eye out for PlusSpec 2017 as this is just the tip of the iceberg, I can’t wait to demo the new handrail tool and PlusSpec Elite. This is the crew at RubySletchs best work yet. I am excited.  BTW there are probaly 200 typos, spelling mistakes because I have not read over. Did I mention it is Friday afternoon? BTW all existing users will be upgraded to PlusSpec 2017 for free!

Andrew is the founder and creator of RubySketch, BIMBits 3D model library, and PlusSpec. He has over 26 years experience as a Builder and has an Advanced Diploma in Architectural Technology.

Remind myself or Tell your friends